I turned the car off, opened the door to kill accessories, and to my surprise the data kept flowing. Lucky for me, the car did not need to be turned on to be on the SW CAN Bus. The stream also slowed down quite a bit. Still too fast to pay attention to in real time, but noticeably slower. Then something happened. As I sat there in the driver seat staring at my laptop screen (yes, I was vnc’d into the pi, I recommend you do the same instead of dragging a hdmi screen and keyboard/mouse into your car), the dome lights turned off and the CAN Bus went silent. No activity.

I hit the lock button on my key fob. The CAN Bus started going nuts again.

And then it died down to nothingness. I really needed a way to filter this. I wasted a few hours on trying to get Can Utils AND a GM LAN sniffer programming running. These programs were supposed to easily filter out all the noise and show me the changes in the noise. Great idea, but I couldn’t get either to work with a Bluetooth serial device. Instead of wasting any more time, I recalled reading in another blog that they hit the button they were trying to find in a very controlled way, dumped the info to excel, and tried to filter it all out. And that’s exactly what I did. Except I went the easier route of just sorting and finding the code that only showed up the number of times I hit the keyfob button. 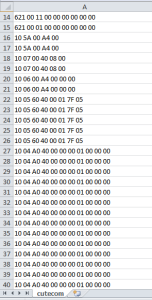 So I have what I think to be my lock button. Before I went any further, I made it my mission to lock that car from the serial terminal. I reset the adapter with ATZ as I didn’t want any old settings to interfere.

I keyed in the hex code into the terminal and… nothing happened. Nothing, at all. I tried typing it with various spaces and with a 0x in front as it was a hex code, and nothing…

I then started the car and tried again.

“Traction Control Off” popped up on my DIC (Driver Information Center)

Hmm. Ok, a response. I like that. Maybe I am just typing it wrong. I then tried to type it every which way I thought it could be.

“F THIS. I am so done. I have dumped enough money into this project and now I will probably need a trip to the dealer on my JUST out of warranty vehicle to fix whatever I messed up. Son of a bitch.” I turned the car off, got out, slammed the door, and went inside for a half hour as I calmed down.

I was sitting inside, on my couch, staring at the ceiling. My brain was running a million miles an hour. I couldn’t drop it. I couldn’t drop that I was stupid enough to break my car and fail so badly at a project that I should have the mental capacity to finish. THIS SHOULDN’T BE DIFFICULT. Time consuming maybe, but NOT difficult.

Still fuming from the Stabilitrak issue, I went back outside, got in my car, started it and… silence. No beeping, no idiot lights, my DIC displayed my compass and mileage. BACK IN BUSINESS BABY!

SO what do I do? I go back to the serial console and type in the same damn command again…

I sat back and took a good look at what I was doing. I reset the adapter again and began to set it up when it occurred to me, I FORGOT TO SET THE SW CAN MODE! So much mental anguish for one stupid command I forgot.

Feeling pretty sure of myself with my adapter setup the CORRECT way now, I enter the code, and nothing. I didn’t even get “Traction Control Off”. I was disappointed, but that was progress.